Whale Found Dead with Plastic Bags in its Stomach 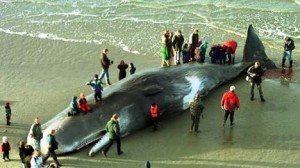 A 14-meter-long sperm whale was found dead earlier this month on Tershelling, a northern island in The Netherlands with 20 kg of plastic inside her stomach.

The autopsy revealed that the 50 ton whale had 59 pieces of plastic inside her. Most of the pieces where plastic covers used in greenhouses across The Netherlands to grow tomatoes.

This is the second time this year a whale is found dead due to ingesting plastics. In March, a 10-meter-long whale was found dead in the coast of Andalucía, Spain, with plastic sheets inside her stomach belonging to greenhouses in Almería and Granada.