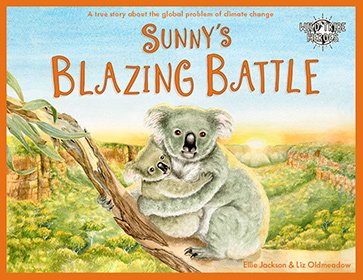 Sunny’s Blazing Battle is the sixth book in the highly acclaimed number one best selling Wild Tribe Heroes series. This engaging story about the global problem of climate change highlights to children the relationship between humans and wildlife and the dangers animals face in their own natural habitats. Stunning artwork captures the imagination of young readers and brings to life a very real threat to our world.

Ellie Jackson is a mother of four young children who has written a series of books to help educate children about the impact of plastics on ocean ecosystems.

Ellie lives by the sea in Looe, Cornwall, and wrote her first book after living on Magnetic Island in the Great Barrier Reef in Australia, during which time, she and her young family saw a turtle called Duffy being released back into the ocean after a year of treatment for ingesting plastic. “My children and I were transfixed by the sight of this beautiful creature being set free, and subsequently visited a turtle hospital on the mainland to find out more. Once my children had made the link between plastics and turtles they were inspired to pick up litter from beaches so that they could help protect turtles and other sea life.”

In this way, Ellie, an environmental scientist who taught geography for six years, conceived her idea to use children’s books as a way of educating young people about the threat to sea life of our dependence on plastic.

Liz Oldmeadow illustrated Duffy’s Lucky Escape and is a multi award winning illustrator and photographer from Port Stephens, a coastal town in NSW, Australia. Liz has always felt a deep connection to the environment and completed a Bachelor of Natural History Illustration at the University of Newcastle in 2007. Liz has been working as an illustrator and photographer for more than 10 years, drawing inspiration from Australian wildlife and landscapes.