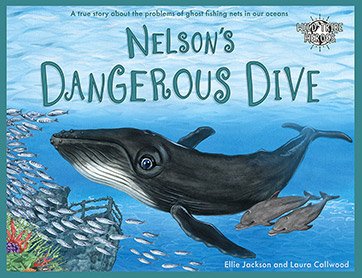 Nelson’s Dangerous Dive goes deep underwater with Nelson the Whale where he discovers a hidden shipwreck and learns that what lurks below may not let you go. As he desperately signals for help, luck is on his side as a group of brave tourists give him the break he needs! The third book in the Wild Tribe Heroes series, Nelson’s Dangerous Dive is the engaging story of the relationship between the actions of humans and wildlife and the dangers they face in their own natural habitats. Nelson’s Dangerous Dive is perfect as a bedtime story or to share with your school or preschool. It is an exciting story based on the true events after a humpback whale became entangled in ghost fishing nets. Stunning artwork captures the imagination of young readers and brings to life the very real threat lost or abandoned fishing nets pose to our environment. Nelson’s Dangerous Dive shares a powerful message which invites children and adults alike to question their actions and the effects on our environment. With suggestions to support sustainable fishing and ideas for the future together with activities which reinforce the story, Nelson’s Dangerous Dive is a book which will inspire your own little Wild Tribe Hero to want to take care of nature and their environment by making changes to the world around them. The Wild Tribe Heroes books have received personal letters of congratulations from Sir David Attenborough and Prince Charles who are both extremely concerned about the issue of ocean plastics and are doing everything they can to help raise awareness. The books have been featured on the BBC, in The Guardian, Mail on Sunday and Huffington Post as well as numerous local newspapers, radio and TV and also featured in international podcasts, blogs and press. Get your signed copy here!

My children and I were transfixed by the sight of this beautiful creature being set free, and subsequently visited a turtle hospital on the mainland to find out more. Once my children had made the link between plastics and turtles they were obsessed with clearing litter from beaches so that they could help protect turtles and other sea life.”

In this way, Ellie, an environmental scientist who taught geography for six years, conceived her idea to use children’s books as a way of educating young people about the threat to sea life of our dependence on plastic.