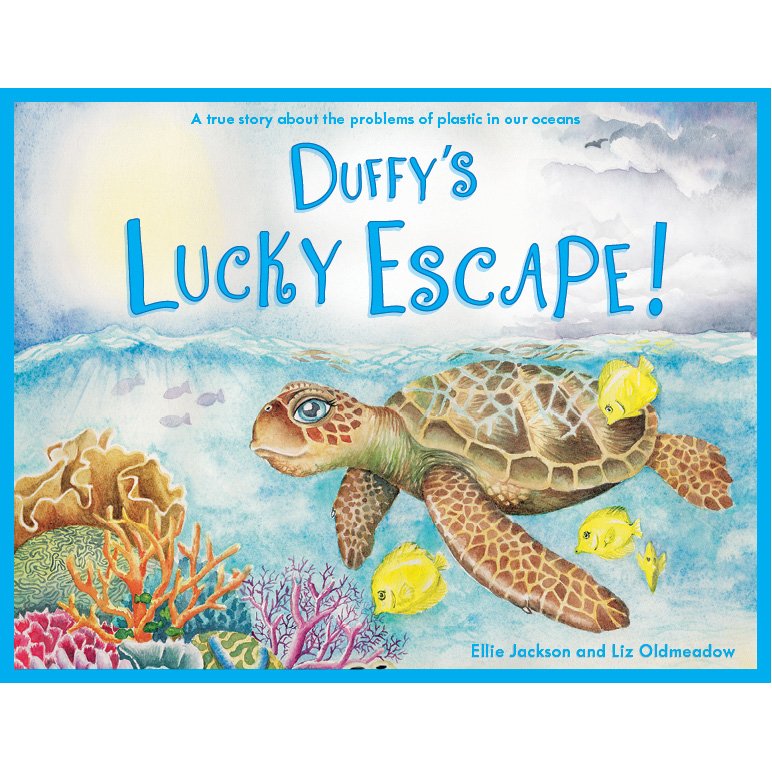 Duffy’s Lucky Escape is the engaging story of the relationship between humans and wildlife and the dangers turtles face in their own natural habitats due to plastic pollution. This beautifully illustrated story guides young children through Duffy’s adventure and her encounter with plastics in the sea after a storm. It teaches children the importance of looking after our environment and how they can help in a fun and friendly way. Get your special copy here, signed by the Author!

“My children and I were transfixed by the sight of this beautiful creature being set free, and subsequently visited a turtle hospital on the mainland to find out more,” she remarks.

In this way, Ellie, an environmental scientist who taught geography for six years, conceived her idea to use children’s fiction as a way of educating young people about the threat to sea life of our dependence on plastic. Thus Duffy the sea turtle was born, whose adventures provide the basis for Ellie’s first book, entitled Duffy’s Lucky Escape and launched earlier this year.

So far, Duffy has sold well, and Ellie’s ambition is to have a copy in every UK school by the end of 2018. She is also selling the book around the world, in places such as Indonesia, India and Australia – with low-cost electronic copies available in countries where books are hard to come by.

“The important thing is that the book reaches people and changes attitudes,” says Ellie, an  who regularly organises litter picks with children on Cornwall’s beaches. “This is about protecting our oceans for all creatures, including future generations of humans.”

Ellie has recently launched Marli’s Tangled Tale, the second book in her series, about a puffin who gets tangled in a balloon, with another book due out in spring 2018.

“By using engaging stories with fantastic illustrations by gifted artists like my collaborator on Duffy’s Lucky Escape, Liz Oldmeadow, we’re able to connect with children of all ages,” she reports. “It’s my view that projects like this can have a real impact.

Ellie Jackson returned to the UK from Australia in 2017, after her brother Dom was killed in a kayaking accident off the coast of Scotland. Duffy’s Lucky Escape is dedicated to Dom’s memory.

Ellie lives in Looe with her husband and four children, and works full-time as a writer and campaigner. She has a degree in environmental science from the University of Birmingham, and taught geography for six years prior to starting her family.

The danger to sea life of plastic in the oceans is a topic of great concern to global governments, with UK environment secretary Michael Gove recently proposing regulation to control the use of plastic bottles. Each year, 100 million sea creatures die as a direct result of plastic in the oceans – depleting biodiversity and impoverishing our environment.
Duffy’s Lucky Escape is illustrated by Liz Oldmeadow, an artist who belonged to a mums’ group with Ellie in Australia.