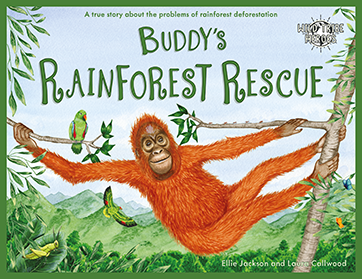 Buddy's Rainforest Rescue sends you on a lively treetop rainforest adventure amongst the trees, vines, colourful birds and insects Buddy the orangutan calls home. Brave Buddy gets more than he bargained for when battles the noisy yellow creatures destroying his home. Get your copy here, signed by the author!

Ellie Jackson is a mother of four young children who has written a series of books to help educate children about the impact of plastics on ocean ecosystems; and now Buddy's Rainforest Rescue, the story of the impact of deforestation on wild animals, such as the Orangutan.

Ellie lives by the sea in Looe, Cornwall, and wrote her first book after living on Magnetic Island in the Great Barrier Reef in Australia, during which time, she and her young family saw a turtle called Duffy being released back into the ocean after a year of treatment for ingesting plastic. “My children and I were transfixed by the sight of this beautiful creature being set free, and subsequently visited a turtle hospital on the mainland to find out more. Once my children had made the link between plastics and turtles they were inspired to pick up litter from beaches so that they could help protect turtles and other sea life.”

In this way, Ellie, an environmental scientist who taught geography for six years, conceived her idea to use children’s books as a way of educating young people